Outrage over George Floyd’s death at the hands of Minneapolis police came to a boiling point in the Bay Area Friday as protesters swarmed a busy freeway and clashed with police on surface streets.

Demonstrators flooded Highway 101 in San Jose Friday afternoon, bringing traffic on the major thoroughfare to a standstill. Some protesters were holding signs seeking justice for Floyd; others said “Black Lives Matter.” Some were seen attacking vehicles on the freeway.

The group eventually left the freeway and returned to city streets where they came face to face with officers wearing riot gear.

During the unrest downtown, at least two dumpsters burned and some windows at businesses were shattered.

Meanwhile, a protest was underway late Friday in Oakland.

It is not clear who is behind the protest. Cat Brooks with the Anti-Police Terror Project said her organization is not endorsing Friday night’s protest but will help bail out demonstrators who get arrested.

“OPD will have to take enforcement action if in fact there is damage to property,” she said. 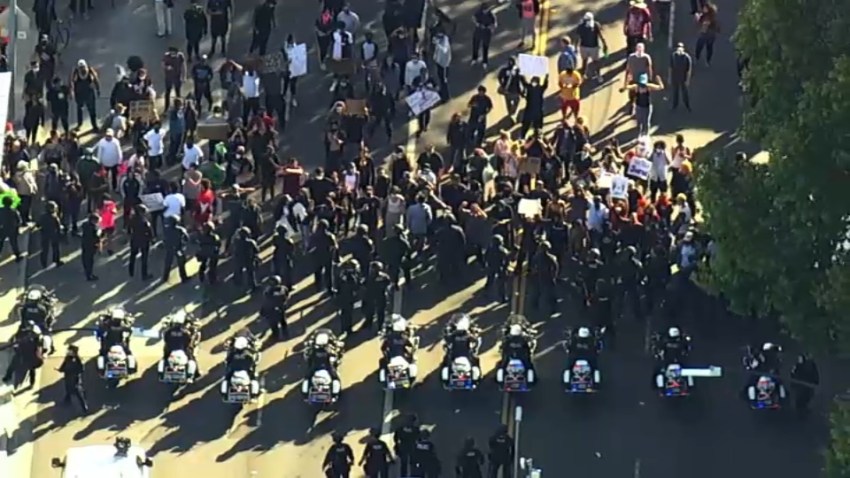 The protests come at a complicated time as the Bay Area continues to fight the spread of the coronavirus. Alameda County, which is home to Oakland, recently surpassed Santa Clara County for most coronavirus cases in the Bay Area.

Some Oakland business owners already struggling as a result of the coronavirus pandemic boarded up their windows as a precaution.

“Don’t set things on fire just because it would really be devastating for us right now,” Danny Keiser from Shiba Ramen said.

On the one hand, Keiser understands the frustration people are feeling following the death of Floyd. On the other, he worries his restaurant in the heart of downtown Oakland will feel the brunt of that rage.

The death of the 46-year-old Floyd, who was recorded on video pleading for air as an officer knelt on his neck, has shocked the country, including police officers who are usually inclined to withhold comment.

The police officers’ unions of San Jose, Oakland and San Francisco issued a joint statement Thursday condemning the actions of the Minneapolis officers.

“What we saw on that video was inconsistent and contrary to everything we have been taught, not just as an academy recruit or a police officer, but as human beings,” the statement read. “We are equally disturbed by not seeing any of the other officers on scene intervene to prevent this tragedy.”

The officer, Derek Chauvin, 44, was charged with third-degree murder and second-degree manslaughter in the case Friday.

The Associated Press contributed to this report.