Demonstrations continue in the Bay Area as part of nationwide protests over the death of George Floyd.

The mostly peaceful protests have been marred by violence and widespread looting over the past days, prompting several cities to issue curfews.

To find out more details about the curfews, click here.

Here’s a look at the latest updates.

Several George Floyd demonstrations have been taking place across the Bay Area this afternoon. Check out some of the footage below.

After the death of George Floyd at hands of Minneapolis police, San Francisco leaders have decided to revisit their policies regarding the hiring of officers from other departments. For more details, click here.

The San Jose City Council is considering either lifting or extending an overnight curfew through the weekend as looting continues. Here’s more.

Have you seen tons of black squares flooding your Instagram feed? That’s because today is #BlackOutTuesday, which started as an intent to be a show of solidarity with the Black Lives Matters movement and a “day of silence” for workers in the music industry to raise awareness. Read more about it here.

After video of an ex-Minneapolis police officer with his knee on George Floyd’s neck sparked international protests, a handful of videos depicting other officers using similar tactics surfaced.

One of the cases involves a San Francisco police officer. Our NBC Bay Area Investigative Unit took a deep dive into this, and here’s what they found.

Some people believe increasing diversity within law enforcement agencies could help reduce the prevalence of officer misconduct. But will it, really? Here’s what our Investigative Unit found.

After days of looting and curfew in place, the city of San Jose is under massive clean up right now. This is what city Mayor Sam Liccardo had to say:

In Santa Rosa, 27 people were arrested after hours of protesting and blocking U.S. Highway 101 south of Steele Lane.

Because of the curfews, the Alameda-Contra Costa Transit will be ending bus service at 7:30 p.m. every day through Friday this week. Here’s more.

In Oakland, police made at least 40 arrests. Details here.

Police responded to reports of looting at Hilltop Mall in Richmond as well as Solano Mall in Fairfield.

Demonstrators blocked a portion of Interstate 680 at North Main Street in Walnut Creek. Officers eventually cleared the freeway and reopened lanes back to traffic.

Protesters temporarily blocked traffic on Highway 101 in Palo Alto this afternoon. They were eventually removed and all lanes reopened.

Local marches and rallies in the name of George Floyd continued today. Demonstrators took to the streets in cities such as Oakland, Walnut Creek, Castro Valley and Dublin.

After another night of civil unrest in Oakland, dozens of people with trash bags, brooms and towels went to downtown today to clean up graffiti and debris.

Walnut Creek police are urging everyone to avoid the downtown area Monday due to potential protests planned and additional calls on social media for violence and looting. Police are also telling businesses in the downtown area to not open and for owners to take measure to prevent property damage.

Hayward police shot a male suspect after responding to alleged looting at a CVS store early this morning. Details here.

SFPD Chief William Scott said 87 people were arrested Sunday night for violating the city’s curfew and follows 33 arrests made the night before for “criminal activity.”

Union City authorities say a curfew will be implemented starting Monday evening due to widespread looting and vandalism. Details to be announced.

In the East Bay, looters and vandals ransacked a Walmart in San Leandro, and a fire broke out in the store. A Hayward gun store reportedly was hit by looters.

San Francisco police say they have made 80 arrests in the Market Street, SOMA and Union Square areas for violations of the curfew order or looting.

Danville has declared a state of emergency due to the civil unrest amid looting and riots. The city has enacted a curfew from 10 p.m. to 5 a.m. effective Sunday.

A judge in Santa Clara County has ordered the closure of all branches of the Santa Clara Superior court effective Monday after the City of San Jose declared a state of emergency.

“With consideration for the safety of the public, our judicial officers and employees, I have made the difficult decision to close our courthouses tomorrow,” said Judge Deborah A. Ryan.

Milpitas police say Nieman Marcus at the Great Mall was hit late Sunday by a coordinated burglary involving 100 people and 50 cars. When officers arrived on scene, the group sped away.

Police in Fremont are asking the public to please stay home amid reports of civil unrest and looting. Pacific Commons and the HUB are closed.

Due to civil disturbances, the the Alameda-Contra Costa Transit District is suspending most bus service through midnight tonight. The following Richmond bus lines continue to operate:  70, 71, 74, 76 and 376.

The Alameda County Sheriff’s Office is advising residents to stay home and only travel if necessary after reports of large groups of rioters and looters move through the East Bay. Freeway, road and exit closures are expected.

Pleasant Hill has implemented a curfew from 9:30 p.m. through 5:30 a.m. Monday. It will continue each night until rescinded, police say.

Police in San Francisco have declared an unlawful assembly at City Hall just after an 8 p.m. curfew went into effect.

Walnut Creek officials have announced a new citywide curfew after looters hit Broadway Plaza. The curfew, effective today, will take place from 6 p.m. to 5 a.m. All businesses in downtown Walnut Creek are asked to close immediately.

NBC Bay Area’s Robert Handa is in Morgan Hill around 6 p.m. where a peaceful protest is taking place.

San Francisco’s curfew starts at 8 p.m. and will last through 5 a.m. Mayor London Breed has said the National Guard will be on standby. More details here.

San Jose announced it too will be implementing a curfew starting at 8:30 p.m. to 5 a.m., and will last for the next seven days or until further notice. Read more here.

San Jose Police Chief Eddie Garcia said his officers have made at least 100 arrests over the past 48 hours during protests.

In Oakland, downtown merchants worked to clean up in the aftermath of destruction from protests held the night before. Check our coverage here.

A photo of the Santa Cruz mayor and police chief kneeling during a protest has gone viral and making its rounds on social media. More on how the image is making an impact across the nation.

A protest was also held in Napa. View video from police below.

San Francisco Mayor London Breed late Saturday announced the city would be implementing a curfew due to violence from George Floyd protests.

A San Jose woman has been arrested on suspicion of intentionally striking a protester with an SUV. Details here.

In a series of incidents that officials say are not related to the George Floyd protests, looters in Emeryville set fire to vehicles, broke into businesses and stole merchandise. Read more here.

Outrage over George Floyd’s death spilled onto Bay Area freeways and streets. The mostly peaceful protests took a destructive turn late in the evening in some cities. Recap here.

A federal officer was killed in a shooting in Oakland. Authorities are investigating and have not confirmed if the shooting was tied to protests in the area.

And here’s a timeline on how the protests in San Jose played out. 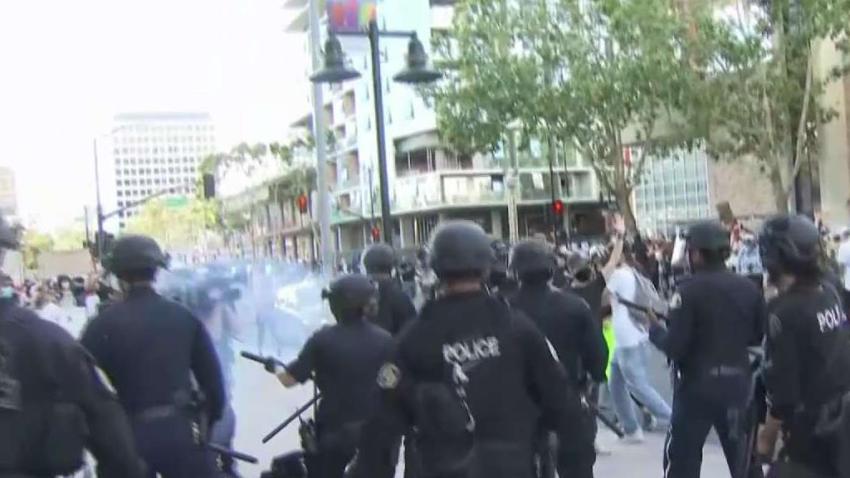 A Look at Historical Context of Civil Unrest 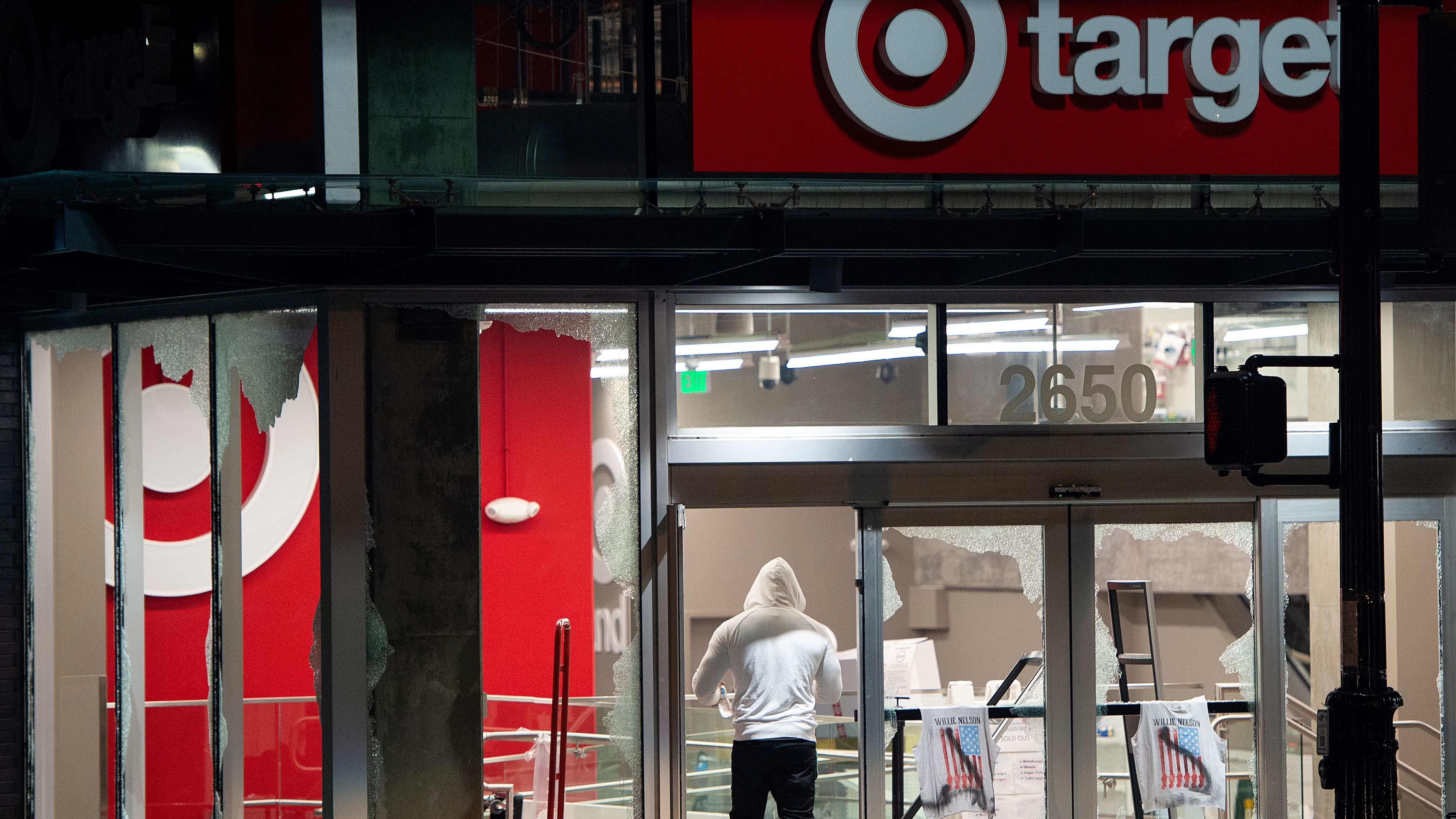 Target Closing Some Stores Temporarily in Response to Protests, Looting